And so finally to the city, where it seems the World Cup really is going on. Commercially everything has gone up a notch, with sponsors advertisements everywhere. The South Island had more of a warm homely feel about it, with hand made displays in shops, childrens pictures etc. We walked around the fan zone on Queens Wharf. There is a big white slug like tent called ‘The Cloud’ For the readers from the Nice One Jonny tour from 2007, it is about 5 times the size of the one by the Eiffel Tower. There was a second almost as big warehouse that housed the corporate sponsors demonstrations etc. Back in the Cloud,  they had included every rugby shirt from every club in NZ. There was a musical workshop going on and a big Taste Exhibition on at the end – like the one recently held in Birmingham. A mate on freeby tickets had to stop for fish and chips on the way home, because the samples were so scant. 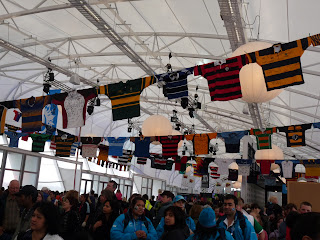 Viaduct Harbour is an area of bars, and it was buzzing with fans. It has a real holiday feel about it as well, with the America’s Cup yachts and other luxury boats moored there. In a match with traditional rivalry, and alleged grudges, Scots and English mingled freely, often as part of the same touring party, or marriage. The Kiwis also have been picking sides to support, and dress up for the occasion – there were several royals including Beatrice with THAT Fascinator, and Zara complete with riding whip.
We walked along ‘The Fan Trail’ to the game. (Over 4km, done it the once, the free shuttle bus for me from now on. As we walked down Queen Street, the main shopping street in Auckland, the lights changed, and half a dozen girls ran into the middle of the road to dance to the Spice Girls. The local art students had put on a sculpture display of black and white plastic, there were Tongan singers, buskers, and stilt walkers again – the Kiwis have a thing about them as they were also in Dunedin. As with most cities, there is a ‘donut’ effect, beyong the central business district, , where how shall I put it, the ‘rateable’ values are much lower. It was an area of many ethnicities, so there was a chance to sample a variety of global cuisine, Jewish, Lebanese, Thai, Vietanmese,Italian etc. 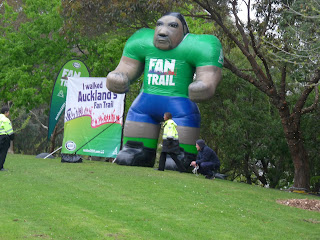 We had a meal and a drink in a bar by Eden Park, a weird affair, it was a converted house, and they had left the rooms as is, so very cosy.
Eden Park the stadium has no wow factor to it. No iconic stands like more modern stadia, but it had a gravity defying statue of Michael Jones scoring a try at the first World Cup. 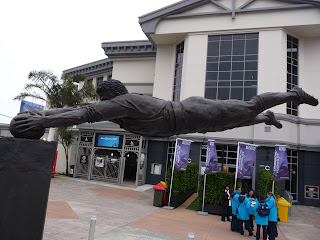 Sitting in an open stand with several layers on, still did not help prevent the penetration the Auckland rain had. Real Scottish drizzle, a highland band to entertain us (if you consider bagpipes as entertainment), and a partisan crowd made it feel like a Scottish home fixture. I watched the worst game of rugby (live) I have ever seen at Murrayfield in 2008, where an out of form Jonny could not unlock the Scottish rush defence, whilst our forwards belly flopped over the ball.
3 and a half years on, different continent, sae rubbishy weather, and history was revisited. This time it took knocks to Tindall and Jonny to bring on Flood and Banahan, which gave more impetus to the whole game, and surprise surprise, within two minutes, with a miss-pass from Flood to Ashton, followed by a touchline conversion to stop Scotland getting a deserved win.
I’ve held off criticising England, but I can’t hold back today. The younger players – Flood, Corbisero, and in the past Foden and Ashton, that Johnno was reluctant to pick until the case was too compelling or the player injured, are the players sorting out a stuttering side, whereas the older experienced players are the ones causing the problems.
The two pieces of controversy that inevitably follows England around in World Cup campaigns, (again I can’t make up my mind whether it is crass stupidity or naivity of the coaches) have involved Tindall and Jonny. As innocent as Tindall may be, with the family friend, he has lost his licence twice to drink, and holds the prud record of drinking 50 cans on the flight back from Sydney. He seems to walk into trouble when it comes to beer, maybe he should put lemonade in it or refrain when you are at a top sporting event. He’s vice captain remember.
As for Jonny, you take away his kicking mojo, and he’s an out of form fly half, as evidenced by Floods ability twice to unlock a stubborn defence, and score using the much maligned ball. This makes Jonny a tackling centre at best. My mate texted me at half time. ‘Where are you sitting?’ My reply: ‘Behind the gaol that Jonny can’t see’.
Johnno seems to show a little too much loyalty, and not enough ruthlessness, and he will have to put that right some time soon if we are to progress further. Whatever is going wrong in the French camp, they always have one good game in them per World Cup and they will want to beat Les Ros Bifs, especially as we have a hex on them at the moment.
London Calling – the stadium’s choice of a typically English warm up song. Damn fine choice I say, and leaps ahead of Banks of Loch Lomond – their Scottish choice.
Posted by Karen's thoughts on the world at 8:36 PM

Karen's thoughts on the world